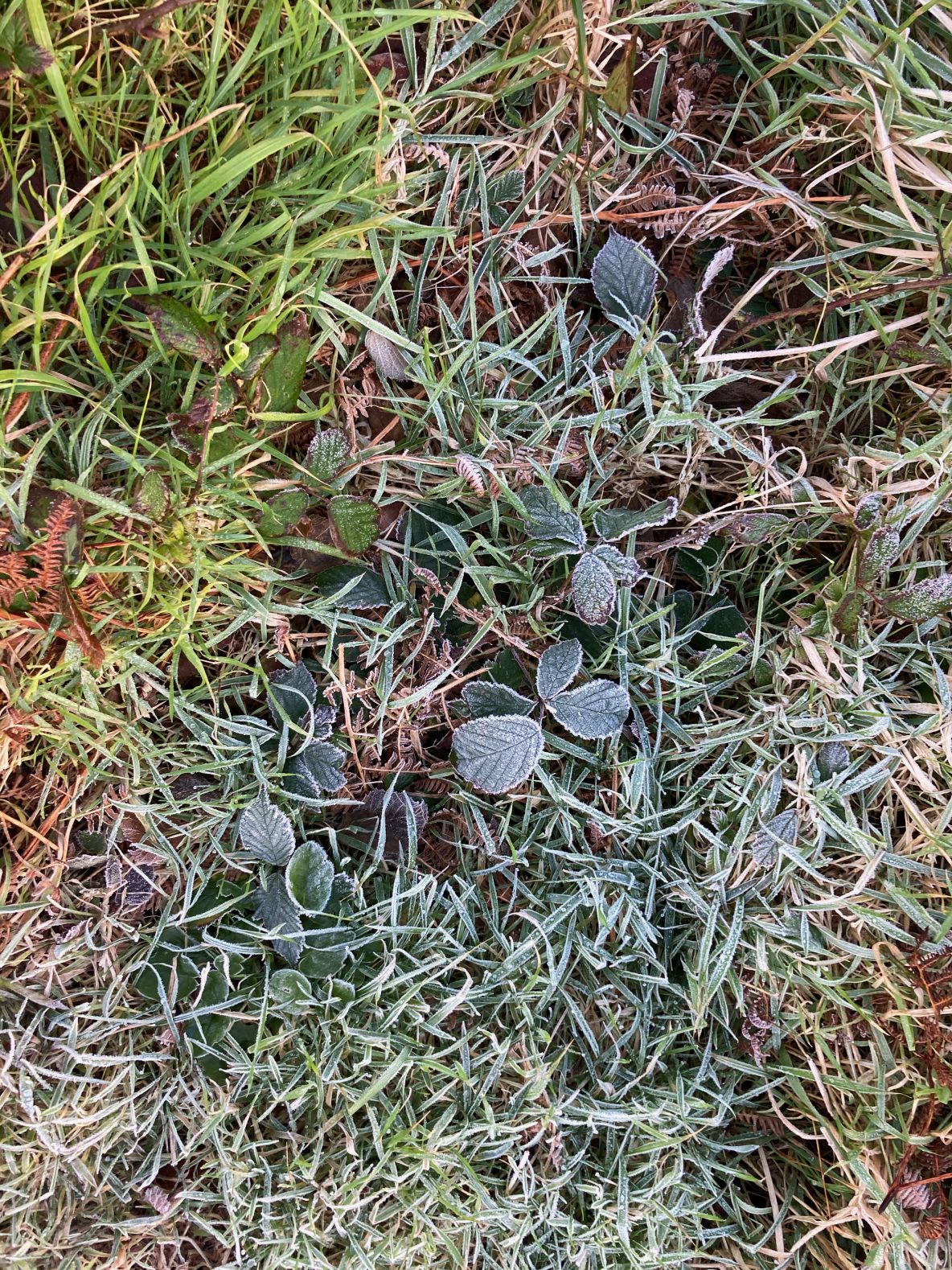 When I set up THE DAILY HAIKU and offered the daily format of people being able to post haiku with the added choice of attaching images, whether photographs or artwork and also video, I was unaware of HAIGA. Little did I realise that in posting images and haiku I was halfway towards discovering the more consolidated joys of HAIGA – the marriage between image and text, where each element is part of the overall formation. Traditionally haiga which originated in Japan was haikai drawing by haiku poets (haijin) where the drawing or painting of the image was created at the same time as the written haiku. Importantly, although the image and text are on the same page they are supposed to accompany one another not explain, they are complimentary.  One of the wonderful elements of the group has been the way members have shared their expertise and knowledge.  Marion Clarke and Sébastien Revon were instrumental in suggesting and establishing a regular weekend thread on HAIGA which invites people to respond to an image (that has been voted on), usually a photograph, which will inspire a haiku. The haiku and the image work together, can be formatted together with text within the photograph or a separate image can be provided inspired by the first with a haiku.

‘The tradition form of haiga consisted of an ink brush painting, haiku and calligraphy. The haiga or photo haiku (shahai) is a modern alternative, comprising a digitally captured image to which the poem is added. However, the production technique is where the difference ends. Regardless of how the visual and verbal elements of a haiga are produced, both have the same objective – to produce a piece of art that will resonate differently than if either the photo or the haiku were presented on their own. In other words one should not simply describe the contents of the other, but, when combined, encourage deeper reflection.  Finally, although the traditional haiga contains a haiku of 5-7-5 Japanese sounds, because of the difference in the length of the English syllables its contemporary counterpart is not required to follow this pattern (although it can). Haiga is about the moment experienced rather than syllable counting. A successful haiga will incorporate several elements that invite the reader to use their imagination and experience in order to interpret the piece.

So, where do I start when composing a photo-haiku? Is it with the image or the words? Well it can be either but I prefer to start with the photograph and look for some aspect that isn’t obvious on first viewing, perhaps even totally imaginary. Sometimes it is useful to draw upon a memory of the precise moment the photo was taken, or try to remember my thoughts leading up to or after it. Looking at the image more closely in case you see something you didn’t notice before is also a good way of finding inspiration. It is always interesting to hear how a particular combination of words and image has been interpreted by the viewer, as often it is far from what the poet had in mind when producing the photo haiku. 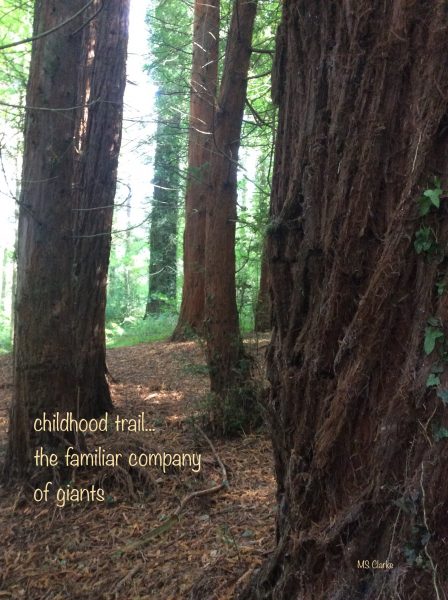 For example, this haiga featuring a copse of coastal redwoods in a local forest park was discussed on NHK World, Japan’s programme Haiku Masters a few years ago. Because of our much cooler climate here in Northern Ireland and the winds that blow in from the Irish Sea, these redwoods will never grow to be giants like their Californian Cousins. At the time of writing the haiku, I was also thinking of how familiar I’d become with some of the forest paths of the Mountains of Mourne since I’d been walking there since childhood and as an adult I have painted many of the local scenes. This area also greatly inspired the writer CS Lewis, whose books had enthralled me, and it is understood that he drew upon the scenery here to create the land of Narnia, saying, “at any moment a giant might raise his head over the next ridge.” The Haiku Masters guest judge who commented recalled a more urban landscape, pointing out that everyone remembers the path they took to school and how the trees that lined the road looked like giants, yet as adults were nothing particularly special, concluding that the photo haiku “contrasted the speed at which we grow with the long years nature spends slowly evolving.” 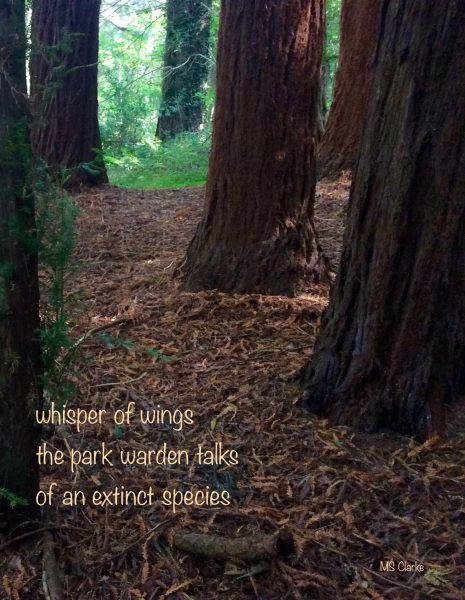 On another occasion, I submitted a similar photograph of the same redwoods, but wrote a very different haiku to accompany it. The guest judge said that the leaves on the forest floor in the image seemed to be rotting and that he could imagine the odour. He also described how the “whisper of wings” in the haiku made him think of the sound of lots of tiny insects, rather than birds, and added that the forest is a stage where the circle of life plays out saying, “although this is a holy thing, there is also something eerie about it.” What had in fact inspired the photo haiku was a guided tour in the forest park led by a local tree expert as part of a community project to produce a book of haibun and art. The “park warden” in the haiku was our guide. He spoke about how some of the trees had been brought to Ireland from other parts of the world and one had become extinct in its native country. The forest was quite overgrown in parts and was indeed a little eerie, especially when a bird brushed past your face unexpectedly, but I hadn’t set out to portray that eeriness in my photo haiku – the viewer had simply seen that in the combination of words and image.’

Note: Haibun is a poetry form that combines a haiku with a prose poem.

Enjoy experimenting with your own haiga – photo haiku. Join in with our weekend haiga thread on THE DAILY HAIKU and do add to our library of possibilities which members can vote on.