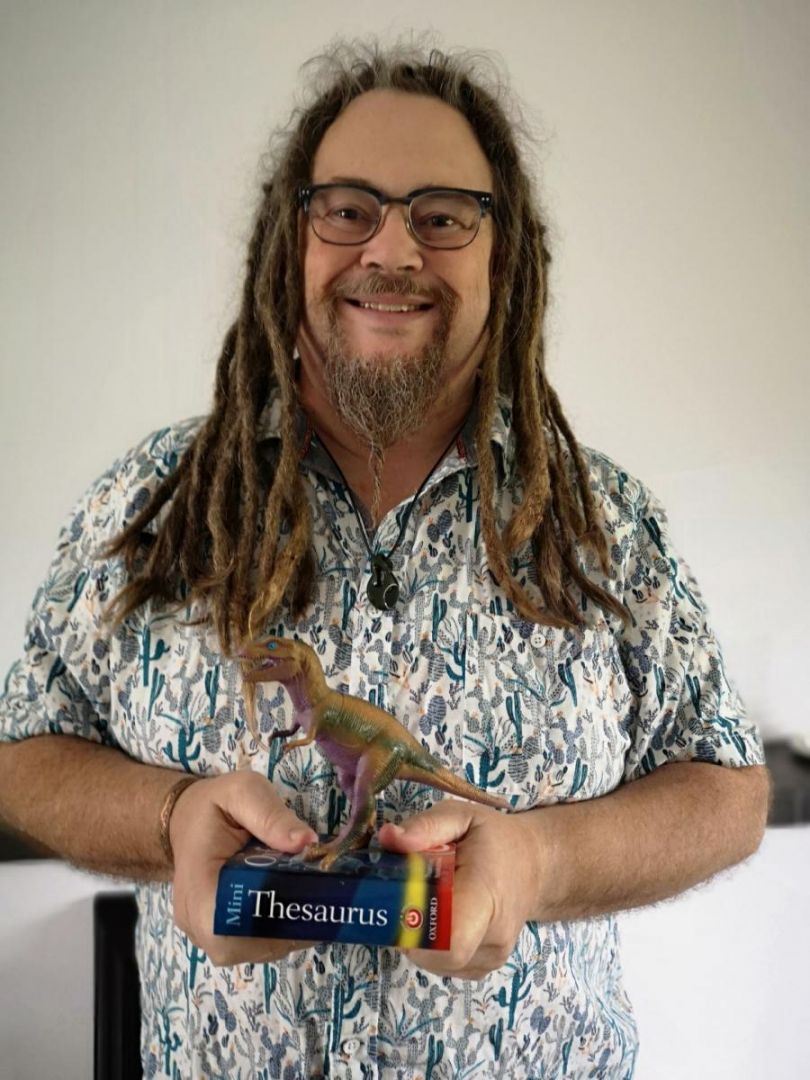 Hi everyone! My name is John Holder and I am a compulsive pun-maker (cue the support group applause!). I live near Stratford-upon-Avon in the UK and, perhaps influenced by its most famous son, I have always loved language, words and wordplay.

The English Language, with its synonyms, homophones, etc., offers so much potential for ambiguity, depth and picture painting. It also lends itself to humour, which I seem to find in most situations, not always appropriately. Voted the funniest of all time in the UK, the comedy sketch the first part of which involves a man asking a hardware store proprietor for “four candles” when he actually wants “fork handles” illustrates my point and sums up my cryptic way of thinking.

I write three line, 5-7-5 stuff which, irrespective of the validity of the term, I will refer to as haiku for simplicity. In addition, I enjoy writing parody songs and have performed comedy skits at village events and cricket club dinners.

My varied career includes research scientist to vocational education support to bid writing/editing to communications to IT consultant. Formal writing skills have been essential throughout. But I am finally starting to explore creative writing as a more pleasurable and fulfilling way of keeping the wolf from the door.

I write captions for greetings cards and social media posts for CSP Countryside Greetings Cards. Excitingly, we have just teamed up with a sports cartoonist and are developing a range of cartoon sporting cards.

For me, writing and reading haiku are principally analytical and head-led processes.

Starting with writing, one of the reasons haiku appeal is the need for cutting, juxtaposition and jolt. Whenever I hear or read a word or phrase my hyper-analytical mind acts like a thesaurus and search engine to identify multiple meanings. This is one reason why I can solve cryptic crossword clues more easily than a quick crossword clue like Bird (5).

I try to incorporate at least one, and often multiple shifts and layers of meaning into my haiku. Sometimes, I notice that it is the first and third line that pair rather than the usual consecutive lines. Then I have never been a purist.

One of the great things about The Daily Haiku is the impetus to write instilled by the ever-changing themes and community posts. I have learned not to check Files for the new themes around midnight, though, as I do need to switch off sufficiently to sleep.

Having thought about what I want to write, the next challenge I relish is choosing the best words for the 5-7-5 structure. The right number of syllables, a word that might allude to different meanings and/or a word that contains hidden depths are my aim. I do use a thesaurus app as I frequently want a synonym with a different number of syllables or a suggestion for an optimum option. Occasionally, seeing an alternative word sends me down an unexpected path and I park the original idea for a different haiku.

One skill I learned in dim and distant school days was précis, i.e. saying the same thing in fewer words. I could never see a use for it at the time.  But I use it for haiku and for word-limited writing all the time, appreciating that this is a very contrived, scientific approach and goes against a Basho-type capturing of a moment in nature in a literal, visceral, sensual and immediate way. However, I am a huge admirer of Salvador Dali who coined apparently contradictory terms for periods of his art such as paranoic-critical method and nuclear-mysticism. His surreal, ambiguous and deceptive imagery inspires me. I aspire to emulate his art in my words through what he might pretentiously term ‘Analytical Creativity’.

In writing, as in life, I struggle to express myself from the heart and emotion. That is why I would never consider myself a poet despite being fascinated by psychology, behaviour and philosophy. The disciplines I feel haiku demand gives me a mandate and valid excuse to be analytically creative.

One of the techniques I enjoy using is to take a well-known phrase or idiom and unpick and re-frame it by cutting to a different connotation. Though many would argue against wasting syllables on clichés, sometimes they can act as an effective hook from which I throw the reader back into an opposing current. I like to use a ‘Where’s Wally’ or, as I prefer to call it, a ‘Four Candles’ approach, too.

Rarely using pictures with my haiku allows me to avoid leading the reader to one of several potential perceptions. I prefer to give them free rein to experience the words in light of their own circumstances, backgrounds and moods. However, I sometimes include extra information or images where I feel the words need clarification or context, particularly for readers unfamiliar with my local culture. Generally, I just launch my ideas out there to the mercy of the reader. Then I sit back to see how they are received, and which perceptions, both intentional and surprising, are reflected back.

I enjoy being part of The Daily Haiku community for many reasons. First and foremost, it is an outlet and forum for my writing. It was a vulnerable but necessary step for me to expose my ‘unorthodox voice’ to a wider albeit already converted audience. I am humbled by the kind acceptance, encouragement and positivity about my contributions. Furthermore the generosity of time and consideration from community members afforded to me and my words.

As one of my core values is fairness and I am so grateful for others’ engagement with my work. I desire and endeavour to return the favour with other group members. As the community expands, life re-opens and algorithms and backlog kick in, keeping up with everyone’s excellent work becomes increasingly difficult. Please accept my apologies if I miss anything, seem to be ignoring you or resort to short comments/emojis. I feel guilty but have had to make peace with it, reluctantly. Also I am ashamed to say that I scan read or scroll past anything that is not 5-7-5 or has more than three lines per post. This has nothing to do with validity or merit of the writing but is my choice to prioritise my time, attention and commenting capacity towards work I prefer to read.

This is the first stage of my mainly analytical reading process I mentioned previously. Is it 5-7-5? What words, synonyms, homophones, wordplay have been used? What metaphors or poetic imagery are being evoked? Are there hidden depths, ambiguity or layers of meaning? Is it funny? Are there any spelling mistakes, punctuation errors or grammatical inconsistencies – once a proof-reader always a proof-reader? I am impressed with myself that I resist my urge to comment on the actual writing. Very occasionally, I feel compelled to make a suggestion to the author on an alternative approach or feedback on ideas their words have inspired in me, but I do try to ask consent first in case these would not be welcomed.

Only after all of that admittedly satisfying brain noise can I try to drop into my body and feel the emotion, atmosphere and moment of the haiku. I am always amazed how just seventeen syllables can transport one to a time and place, can make one feel so much and can jolt one’s perceptions so powerfully.

The joy that reading the haiku on TDH brings me is second major benefit of the group. The third comes from the camaraderie, friendships, conversation and fun. Also the enforced non-work time and remote communication channels that have opened up through the pandemic have been an unexpected positive. As they say, it’s an ill wind…

I feel I have made genuine friendships through haiku and the opportunities for dialogue The Daily Haiku FB Group presents. In this way I have ‘met’, chatted and made strong connections with people from across the World I would never have come across otherwise, and I am enriched and happier for it. Long may it, though not COVID, continue.

To finish, without doubt the highlight of my haiku career to date was presenting a selection to an audience at the Pundemonium panel game at the Cheltenham Literary Festival in 2017. As well as having to improvise puns in real time, we had a slot to pre-prepare pun-based material. This was my first public haiku reading and the audience response was so good that I ended up winning their Tyrann-Thesaurus trophy and going forward to a champion of champions event in London. 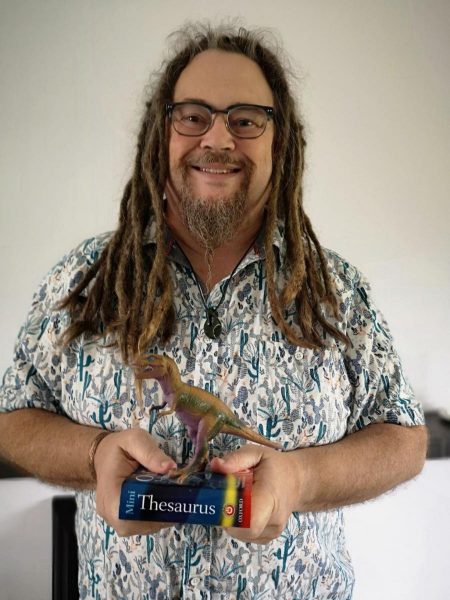 One literature-based haiku that went down well at Cheltenham was:

I like to be edgy occasionally – though there is nothing wrong with it, I am not really a cherry-blossom, birdsong and frog kind of bloke.

My second example that is typical of my ‘voice’ is:

Conflicts are things of the past

It starts with a common phrase and contains plays on words. In one interpretation, line 2 implies conflicts have been forgiven and forgotten. However, line 3 raises the possibility that conflicts which happened in the past are still festering and old wounds might resurface. I actually have this haiku as part of a tattoo, so I need to like it really!

Anyway, that’s me. Thank you and happy haikuing!